Everyone, who at least once tried to play blackjack, knows that there are many strategies you can apply to your gaming. There are many online casinos, where you can learn and improve your skills. But the first thing you are to do is to learn the rules of the game to understand how the game is running and what to expect.

Strategy in the First Place 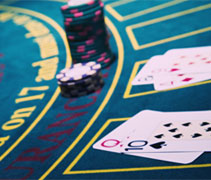 There are many strategies you are free to follow in the blackjack game but among them Card Counting is supposed to be the most contradictory one. It is contradictory not because you may misunderstand it but because the casinos cannot agree whether players may use it or not.

Card Counting is not recognized as cheating by law. The law sees it just like Martingale or Labouchere system. The casinos see a huge threat in card counting as that makes them suffer from losses. The card counters can bring the house down and the gambling bosses are afraid of it.

Once a card counter is spotted, the managers will do everything to make him/her leave the casino as soon as possible. The bosses know how much damage a team of card counters can bring to the house that is why they try to defuse them. You might know the Griffin Investigations, which became a bankrupt after it was sued by two professional card counters. Those two men were kicked out of the casino while gaming. But they knew their rights and that gave them a chance to continue gambling.

The father of this wonderful strategy is Edward Thorp (history of card counting), who wrote a book 'Beat the Dealer'. In the book he wrote that if you know, which cards were played, you can figure out which cards are left in the sure and will be dealt further. It is the basis of card counting. But you do not have to remember that Jack of Diamonds or Queen of Spades is out, especially while playing with 6 or 8 decks. You just add and subtract the numbers.

As the method of Card Counting spread fast beyond the borders of the USA, new variations (card counting systems) were developed and now you have a huge selection of them. You are free to choose whatever you want. It seems that the most known are Hi/Lo and KO systems. They are supposed to be the easiest among the variety of card counting systems.

It is most famous card counting team (MIT) ever. Its history was fully described at the Bringing Down the House book by Ben Mezrich. There was also a movie 21, which was based on the book and told the history of MIT. That was a real blast in the world, as millions of average people learnt so many interesting aspects about the casinos and blackjack at once.

But not everything in the movie corresponded to the real story. MIT Team made much money on gaming. But they lost a lot, as the casino surveillance systems recognized them. They had wonderful experience and now many of them are not connected with the casino world.