Chinese Blackjack is a very popular game in South East Asia and China. Sometimes it is called 21 point, Ban-Luck or Ban Nag and the main principle of the game is almost the same as in traditional blackjack game. Moreover, Chinese Blackjack can be played with the help of 1 or 2 standard 52-card decks. The rules of the game don't limit the amount of players. If you are interested in the alternative of the Blackjack classic game we provide you with the main rules of Chinese Blackjack.

Main Rules of the Game 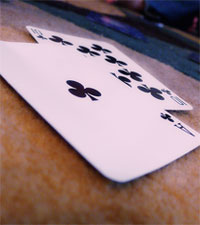 The quantity of players is not limited, as it was already mentioned, and one of the gamblers should be the croupier. Don't try to compare it to Pontoon game as they are rather different. The main idea of the Chinese blackjack consists in following: the player has to make one of hand combinations. These combinations are: an Ace and a 10 sometimes it is called Ban Nag or total of 15 points and pair of Aces which is named Ban Ban. The sequence of the game: when the players begin to play the Chinese Blackjack firstly they make their initial bets. After this, the dealer shufflers cards and the gamblers are cutting the hand in order to take cards. The dealer distributes two cards to each player.

The ranking of cards in Chinese Blackjack game is the same as in regular blackjack game. The numbered cards ranks to their value (a 5 is worth 5), cards with pictures (Jack, Queen, King) are considered as 10. In order to win you should beat the croupier`s total not going over 21. You see that cards are scored similarly to regular blackjack, but Chinese Blackjack has some exceptions when it comes to the worth of Aces.

So, if you are a hot-tempered player and want to diversify your gambling skills and experience you are welcome to try Chinese Blackjack game, and you can download blackjack game as well. It is always an adventure to try your luck in different games. Chinese Blackjack game gives you a possibility to play not in traditional way but with some interesting and unique rules.