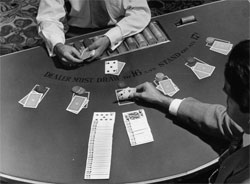 It is considered that the father of card counting is Ed Thorp; as a matter of fact he is the originator of modern methods of counting cards. But Ed Thorp didn't contrive card counting, and he wasn't the first person in blackjack who was able to count cards in order to beat the house.

It is a book About Jackpot Casino App which was published in 1957. It has made a sensation in the gambling world industry. The book was really a great break in gambling because it was the first edited book about the counting cards in blackjack game, it was published five years earlier than well-known "Beat the Dealer" by Ed Thorp. Still the card counting method represented in "Playing Blackjack to Win" were rather arguable and didn't give chances for victory to the players.

This book was published in 1962 and has been written by Edward O. Thorpe. The main idea of the Thorpe`s book consists the conception of using mathematics in gambling, it also confirms that some cards are profitable to the gambler, and other are profitable for the casino dealer. He demonstrated that depending upon circumstances and the cards which were dealt, we can guess which cards were left int he shoe.

If you use only your brain and intellect to count the cards then casinos of Las Vegas will be legal. But despite of that, casinos are not pleased with such sharp wits and try to determine such geniuses in order not to give them a possibility to come back and win again. You may think that it is unfairly and maybe that is discrimination because the card counters don't fall within the jurisdiction of the discrimination laws which are fixed by the Supreme Court, but still casino owners try to get rid of card counters as soon as possible.

The card counting gained its popularity in the 70s and 80s with the growing technological accessibility and the power of computers. As a result of such computer development the students of the MIT College (also called as "MIT Blackjack Team) decided to take part in the process of card counting. Thomas Hyland standed out because of his great abilities, he also was known as the King of Card Counting. He was at the head of his great team, they aimed the casinos of Las Vegas, Bahamas, Atlantic City. However, the casinos revealed their secret and all of them were banned in all gambling places.

Another interesting personage of the history of card counting was Julian Braun. He was the technician of the IBM Company. He made use of IBM production capacities without permission. He tested the powerful, super computers of the Company in order to create a Blackjack card counting system.