Have you ever heard about MIT Team? This is a well-known group of students from Massachusetts Institute of Technologies who played cards using counting systems with an aim of beating casinos playing blackjack. This team actively operated from 1979 to the beginning of the 21-st century. Functioning of this team became an impetus for other blackjack beating formations. Actually, nowadays there are too many people who successfully use counting method in order to beat casinos and trying to become 'the other' MIT memebers. 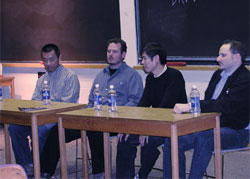 The MIT students did realize that blackjack is one of the games at which you can apply mathematic knowledge and it is one of the games that can be easily beatable. They also used advanced computer models in order to count cards and predict the best strategies for certain situations. Such kind of activity extremely helped them to become proficient players.

The team constantly went to Las Vegas. Mostly they traveled there in the 1990s (almost every weekend). But later on casinos became able to detect them and started to eject from playing areas without a reasonable explanation. Nevertheless, such phenomenon was a remarkable point in gambling industry and had a lot of positive results for further card counting development.

The MIT strategy approach was based upon the principal that all seats at the blackjack table had to be occupied by the team members who let one of the member win the pot. The team members used small bets and were counting cards. Such strategy helped them make the appropriate decisions at the perfect time. They used a set of code words to inform each other about the cards` count. Here you may see the words which had some hidden meaning:

Football: +11 (number of players in a football team)

Paycheck: +15 (day of the month most people get paid)

Magazine: +17 (the name of the magazine)

The popular movie "21" has depicted this scheme and some moments of MIT operating in casinos. Watching this film, you will see how a group of professional players that have invented their blackjack counting strategy managed to apply it in real life.

You should know that card counting is not considered to be illegal by casino authorities as a kind of cheating. The matter is that in some casinos you can be ejected in case if you are caught on cheating. It is not a secret that many casinos use special systems oand professional people that can easily detect whether you are cheating or not. So be careful if card counting is your choice.