This game is known as another variation of blackjack. Some people say that Spanish 21 is better game in comparison with traditional blackjack. This game was created to attract inveterate gamblers with relentless pursuit for new winnings. This game variation has some very specific rules which make it very attractive for playing. If both a player and a dealer have 21, the player wins. What a fantastic game! If you have a burning desire to play something different than blackjack (but not too much different), Spanish 21 is the game you are looking for.

What makes Spanish 21 different from classic black jack game? Rules of Spanish 21 are a bit different to those of the original blackjack. First of all, in Spanish deck you will see 48 cards only. Secondly, this deck lacks 4 tens (this may also have some pros and cons). But both Spanish 21 and blackjack are played on the blackjack table with a custom layout. Here we give you the principal rules of this game: 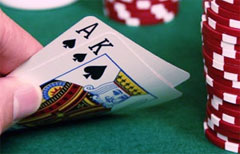 You have to know that Spanish 21 in most cases has many bonus games combined with extra side bets that go together with a typical game. One of the most popular such bonus games is Match the Dealer side bet. You can win this bet in case if one or two of preliminary cards make a match with the dealer`s face up cards. But be aware that in some casinos rules of bonus games may be a bit different. You just have to find out more information about the casinos games` offers and the rules of bonus games.